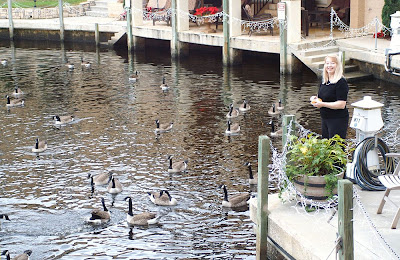 We arrived home from church this afternoon to find an armada of Canadian Geese paddling around in our back yard. I counted 38 of them, the most we've yet seen around here. As I stepped outside with the camera, they all swam toward me, looking for a handout. Since there was no Molson or LaBatt's in the house, Anita scrounged around and managed to find a few old biscuits for them.

Friday I will have my 21st Proton treatment, which will mean we're half done. They say that time flies when you're having fun; it seems that as we grow older, it flies even without the fun.

Hope you all had a very Merry Christmas, and we pray God's eternal blessings to you and yours in this New Year.
Posted by Ron at 6:29 PM No comments:

Last evening (Wednesday) I had my 14th Proton treatment, which leaves only 28 to go. Hopefully these will go by as quickly as did the first 14.

Each week I meet with my doctor to review progress of the treatment. Side effects have been minimal and tolerable to this point. My vitals have been pretty constant, except for my weight being up a couple pounds last evening. I guess I have to blame that on Al and Elaine Fricke and on Clive and Hyacinth Stephenson, whose generous hospitality we enjoyed on Christmas Eve and Christmas Day. Anita and I give thanks to God for the bringing new friends into our lives. We've gotten to know a lot of other patients at UF Proton Therapy Institute, folks from all around the country. We've been worshipping with the folks at Ortega Presbyterian Church and have enjoyed a wonderful fellowship with them. Reminds me of Pauls words in the Epistle to the Romans, chapter 8:28: "..we know that all things work together for good for those who love God, who are the called according to His purpose." Surely it is a very good thing to find new brothers and sisters in Christ.

We will complete my course of treatment, God willing, near the end of January. We'll return home for a time and depending on how soon my routine returns to normal, will be planning a visit to Wisconsin to see my mother. She still has a feeding tube but is responsive to stimulii and we have hopes for recovery from her stroke. We understand that she enjoyed Christmas worship with my sister and her family; for that we give thanks. Your continuing prayers on her behalf are very much appreciated.

As mentioned above, we had a sweet time of fellowship over the Christmas Holiday with some of our new friends. we shared greetings with many old friends, and we greet those of you who are reading this. "May the Peace of God, which transcends all understanding, guard your hearts and minds through Christ Jesus. Amen."
Posted by Ron at 10:46 AM No comments:

I'm not as good as I should be at updating this thing. It's ten days since my last post and I've now completed 13 (of 42) of my treatments -- over 1/4 of the way through now. I've been doing a lot of reading and found an excellent used bookstore nearby.

I mentioned before that we live near the Naval Air Station here in Jacksonville. They fly a lot of these aircraft -- P-3 Orions -- around this area and evenings apparently are their times of choice to do their practice landings. I stepped out the back door the other evening and made this photograph of one turning final. I should mention that often, instead of doing the normal "downwind leg - base leg - final approach" to the runway, they will make what some know as a "Carrier Approach" in which they come downwind and then make a sweeping turn to short final. It's neat to watch.

Mimi and Bert tell me the bird pictured below is some variation of Muscovy Duck, and I happily defer to their superior knowledge. Thanks, friends. There are a lot of Canadian Geese around here, but they prefer the river to the parking lots.
Anita spoke with a cousin last evening, and found out that he too has been diagnosed with prostate cancer. Seems to be a lot of that going around, but I suspect it's being discovered more often now with modern diagnostics and blood tests. We'll be praying for Dennis, that he too finds the best course of treatment for him. I've put up some on my web site, at http://kohlin.com/Proton.htm; please take a look. 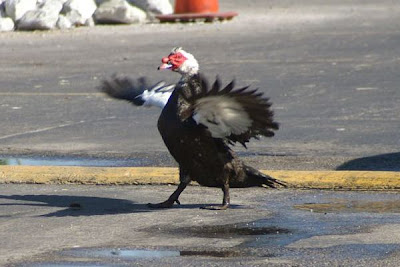 I pulled into a strip mall parking lot today and found this guy taking a bath in a puddle there. He acted like he owned the place, not moving even when a car approached. Once he finished drying his wings he strolled off to a nearby drainage ditch. If you know what breed of bird this is, let me know. He's certainly not one of the most attractive of God's creatures, but makes up for it with his attitude.
Posted by Ron at 4:28 PM 1 comment:

Psalm 136 closes the "Great Hallel" and contains the refrain, after each of its 26 verses, "for His Mercy Endures Forever." I feel amazingly blessed by Him as I go through treatment for the cancer that He, in His infinite wisdom, has seen fit to allow into my life. What could be more amazing than that He would lead us to Proton Therapy -- http://kohlin.com/Proton.htm -- when even my urologist didn't tell me about such treatment.

Some of you may remember that I like trains. God used Christian friends to lead us to a place to stay here in Jacksonville that is close to a busy rail line. I can listen all day (and night) to train horns at the nearby grade crossing. What could be better than that?

Let me tell you. God also gave us a place to stay that is close to a PCA church filled with caring people, people who understand the meaning of prayer, and Christian Fellowship, and what it means to be children of our Heavenly Father. We have found amazing connections with the people of Ortega Presbyterian Church -- http://www.ortegapres.org/ -- and are looking forward to worshipping and praying with them during our stay here. Surely "..His Mercy Endures Forever."

I've completed three treatments (Wed, Thu, and Fri) and have had the weekend "off." Yesterday Anita and I went up to Amelia Island. It was a perfect Florida day, sunny and warm, and we found a lovely restaurant for lunch, a lonely beach to wander on while collecting sea shells, an historic town (Fernandina) to wander through, and last but not least, a train to chase as we left town. Psalm 23 comes to mind: "Surely goodness and mercy shall follow me all the days of my life, and I will dwell in the house of the Lord forever." Amen and Amen!

Here's the Prince of Amelia Island. 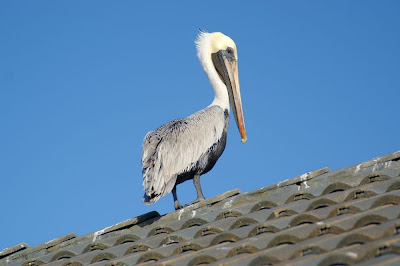 I just got back from my first Proton Treatment, the first of a total of forty-two.

Prostate cancer is a funny thing. If your doctor ever tells you you have it, get all the details, do some research, and then go off and get a second opinion. I did, and am I ever glad.

(Technical stuff follows; feel free to ignore if you're a girl or if you haven't been diagnosed positive) My initial diagnosis was "3 of 10 biopsy samples positive for cancer, Gleason 3 + 3, T-1-C". When I found out about Proton Therapy, I came down here and had a major "second opinion" which included a battery of tests including a bone scan, CT scan, MRI scan, another biopsy (this one was mapped, with twelve rather than ten samples), and evaluation by my urologist and six of his collegues. Today I found out that only 2 of the 12 samples were positive, but that my Gleason score was placed at "4 + 5." This places me into a "high-risk" catagory, as opposed to what was hoped for based on the initial diagnosis All scans were normal, and verified that the cancer had not spread beyond the prostate; that is a definite positive. I guess the rest is, as well: I will need to have 42 treatments (the initial biopsy led me to hope for a lesser number), each treatment will be a higher intensity, and after the proton treatments end, I will need to have some hormone treatments as well, to ensure that they get "the whole enchilada."

Anyway, I must say that I'm pretty happy with all of that. Also happy with the place we found to stay while we're here. We're having problems with our computers (the power supply in Anita's CPU died en-route to JAX, and the display on my laptop has developed a problem) but the former will be fixed soon under warranty, and the latter doesn't keep me from necessary duties. Did I mention that we're happy with our new digs? Thanks, Randy Stair, for your suggestion.
Posted by Ron at 4:33 PM No comments: